Its a beautiful day in the park and everything is going just fine,kids are flying their kites,old buddies laugh as they remember the good old days then there is that teenage couple making out (and making the single ones feel like sheesh can’t they get a room) …suddenly there is a huge boom, you look around and its this whack job with crazed out powers ranting on about his superiority and blasting everything and everyone in his sight,he cannot help but notice this little girl who is lost and scared,he moves slowly towards her as the crowd flees in terror and you can’t help but feel sorry for the little girl,it seems all hope is lost and then out of nowhere a blur strikes back against the villain, turn around and you see an individual in colorful spandex buffed up and if you are lucky maybe he has got a cape on if not yup a mask and he looks a tad scrawny but be it cape or not you know he is gonna get a beating you yourself would never dream of enduring and he is gonna help that whack job find his way to prison but you got to ask yourself is that what Africa needs?

Don’t get me wrong superheroes are awesome and yes the whole color scheme,costumes and symbols give them a nice wrap up but when you come to our world the problems and monsters we would have to contend are not the likes meant for Super heroes they are meant for African warriors!For us to truly understand what an African warrior is and why they differ from Superheroes we will need to go back to the Genesis of Superheroes that is around the mid 1930’s? We will have to discover what Superheroes truly are and once we do we will know if they are the ones worthy to fight Africa’s battles or if Africa needs a new breed defenders!

SUPERHEROES THEIR PURPOSE AND STRUGGLE

Superman is widely considered the first superhero making his debut in 1938 but that fact is still been debated as the likes of the phantom and the lone ranger predated him in fact some even consider the likes of Robinhood to be superheroes but everyone knows that the modern phenomenon we all love today is a result to the success of the man of steel himself.That said one would realize that superheroes came to prominence in the time of the Great depression a global phenomenon that virtually saw the whole world spiral into poverty, times were difficult and people needed hope things would get better they needed to be reminded there was still good in the world and they needed to be reassured that the future no matter how bad things were then was bright! Superman did that for a lot of people.He fought injustice and symbolized the hope the world needed, in the years to come many more heroes like him would emerge and thus the golden age of superheroes began.Ever since then superheroes have inspired children,teens and adults all over the world  spreading their message of truth ,justice and liberty all the while helping us in times of peril and reminding us that no matter what disaster comes our way we will overcome stronger than before.

Even the very early legends like Robinhood and the likes of Hercules all came to prominence in times of hardship and crisis.

WHY THEY CAN’T WIN AFRICA’S BATTLES

It is true that Superheroes were created in times of crisis and have seen huge success over the years all over the world but Africa’s battle is simply one they cannot win.It is like this Superman is  superstrong and everything but he is not someone fit to fight the Joker, you leave him and the joker alone in the same world without Batman intervening and you get Injustice .It is the same thing Batman is perfect for the joker so superman leaves him to Batman and concentrates on Luthor and Zod because we all know what happens when superman and the joker meet…. 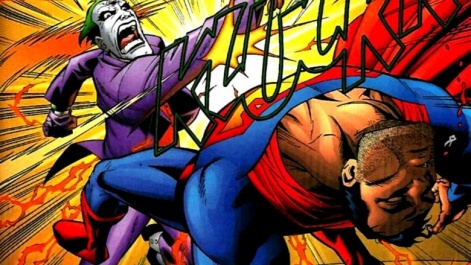 anyway the thing is Africa has a more peculiar problem.This is a continent which is suffering from a loss of cultural identity and trying to find its way back, its a continent which finds that its own people no longer appreciate it and find it outmoded and archaic,as we all know the situation is a result of the continents current taste for foreign produce and it’s constant attempts to mimic cultures it deems superior when in fact that is not the case.Superheroes arise from the very culture that has in numerous ways thrust the African culture into nigh obscurity so how then can they hope to help Africa find her path when they are in fact a part of the problem.The simple answer is they cannot, but hold your horses that does not mean all hope is lost,it also does not mean we cannot learn from them.What it means is only Africa can fight her battles and that though Superheroes cannot help her she come learn from them.The whites have no monopoly on legends and in fact that is all Superheroes are, legends dressed in western culture (Spandex and capes).

SO WHAT SHOULD AFRICA DO?

Instead of looking up to someone else to fight her battles she should create her own legends ,her own warriors who will tirelessly defend her culture and show it for what it truly is ,epic,refreshing and just simply amazing…

the only issue is that Africa’s Culture has not been upgraded for a long time as her sons have been too busy fighting the forces of colonization and the cancer of cultural inferiority that has been plaguing the continent.If there was anyone and anytime to bring Africa back to her glory it is us and now and the first step is by looking to Africa herself to win, not the heroes of another world but the African Warriors of this one.